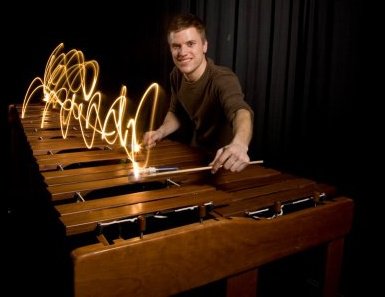 Andrew Thomson, ASCAP, (b.1988) has earned international reputation as a composer, performer, and educator, and has collaborated with a variety of organizations, ranging from the internationally acclaimed choirs of Joyful Noise, Inc. to the United States Marine Corps. Andrew began music at age four with voice and piano, adding percussion shortly thereafter. In 2006, Andrew enlisted into the U.S. Marines as a musician (and rifleman), and became the youngest member of the composition and arranging staff at the Armed Forces School of Music at age 18. Following his enlistment, Andrew earned a Bachelors of Music in composition and percussion with a minor in anthropology from Ithaca College, under the tutelage of Gordon Stout. Andrew currently teaches percussion in northwestern Connecticut, and continues to give clinics, recitals, and masterclasses around the country.

Andrew is a proud artist for both Marimba One and Grover Pro Percussion.

The nickname "Pipeman" wasn't given to me because I play bagpipes, nor does it stem from a particularly harrowing incident involving the kitchen plumbing. In fact, during one of my summer month expeditions north into Northern Quebec, I took to smoking a tobacco pipe to pass the time and help keep bugs away. A Cree native elder approached me to ask what sort of "special" stuff I was smoking, and upon learning that it was regular pipe tobacco, laughed and bestowed upon me the nickname uspokkannebeow, or "the man that smokes a pipe."
If you were hoping for a bagpipe reference, here's my recording of Port na Bpucaí ​on the Irish uilleann pipes with an orchestral accompaniment.